The walk will do us good

in Advertising, Cause Marketing 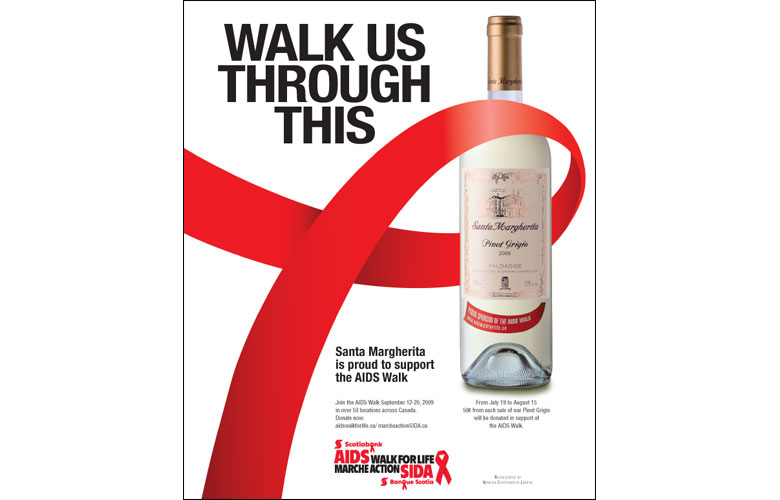 I love cause marketing assignments. It’s heartening to know the people I’m working with care enough about a cause to contribute to it. It’s empowering to think that what I do will have an impact.

Cause marketing is win-win. Not only does the cause benefit but typically, sales of products involved in a well-executed cause campaign will increase during the promotion period. Many consumers faced with a choice between competing products opt to purchase a brand that donates to a cause. Even when it isn’t their usual brand. The donating company also enjoys positive brand perception because they’ve demonstrated social responsibility.

I have worked with Italian wine producer Santa Margherita for many years. In 2007 they enthusiastically accepted a request to support the AIDS Walk for Life in Canada. Directly, they agreed to donate a portion of sales from their products for a defined period of time to AIDS organizations across Canada. In addition, they would advertise their promotion in a way that would bring attention to the AIDS Walk event.

The ad I created above was for the 2009 campaign. As per the two previous years, the ad prominently features the red AIDS ribbon to connect viewer attention with the cause. Other consistent elements include the WALK US THROUGH THIS tagline and bottle that features a red ribbon below the label. The ribbon on the bottle is another element of the campaign and includes information about the event. Each of the three years’ campaigns present the AIDS ribbon in a unique way yet maintain overall visual continuity. This year, the ad was placed in several major Canadian magazines including Chatelaine, Canadian House & Home and Toronto Life as well as some smaller niche publications.

The creative concept was also used on point-of-sale displays, menus and t-shirts. A bottle neck dangler, die-cut in the traditional shape of the AIDS ribbon was very effective for drawing attention and communicating support for the cause. The t-shirts were worn by Team Santa Margherita at the event (see video). Now that’s walking the talk.